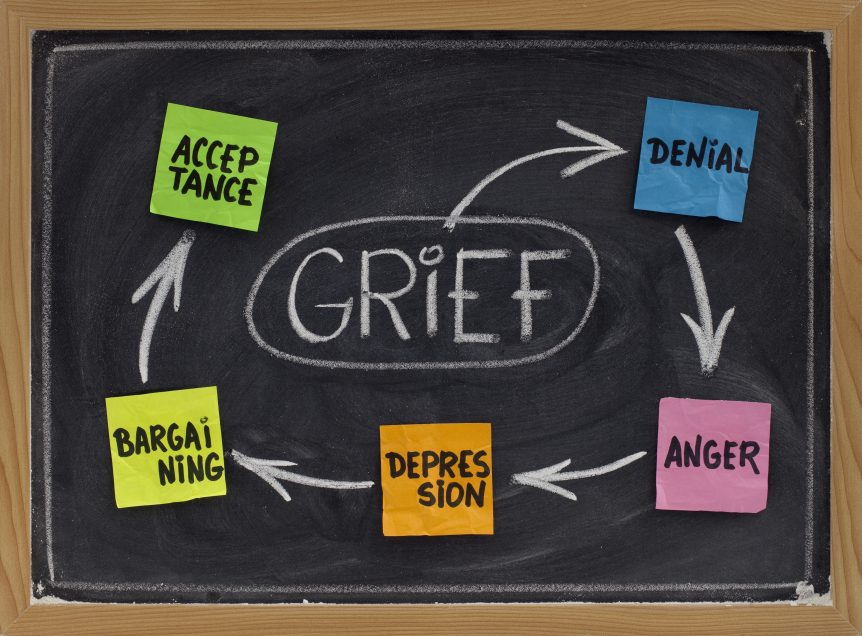 Why do mediations take so long – often all day? Sometimes the outcome seems fairly predictable. A solution is reached where an outside person might say: “That was obviously going to be the result from the outset, what took them so long?” Those experienced in mediation know that the parties need to go through “the dance” (as it is sometimes described) before a settlement can be reached.  But why?

Often we answer that people need to be heard.  Once they’ve been heard they manage to move from the emotional to the rational and to contemplate solutions. This all takes time.  I think that there is also something else going on.  Perhaps the parties need to go through what Kubler-Ross called the five stages of grief before they can move on towards a settlement?

We usually think of these stages in relation to people who suffer a bereavement or some other major form of loss such as divorce or redundancy.

So in mediation what is the loss? It is the realisation that the vindication or settlement that a party believes he or she is entitled to is not going to be achieved. The five stages look something like this:

Denial: One party just cannot believe that the other side doesn’t see the justice of their case.  “My professional advisers have advised me that …”.  “I have a complete paper trail that shows that I am right …”. “It is so obvious, why don’t they get it?”

Anger: When the other side still “doesn’t get it” the mood can quickly change to anger.  Dehumanisation kicks in. They don’t want to meet the person on the other side: “You don’t know what he is like.  He is a liar and bully.  I don’t want to see him. There’s no point”.

Bargaining: We are not here talking about the negotiation between the parties but the bargaining that is going on in the head of the person we are considering.  It involves futile “what if” questions.   In the bereavement context it might be: “What if I hadn’t nagged him to go out shopping? If I hadn’t he would have gone later and not been involved in the accident”.  In the mediation context it might be: “Why did I tell the solicitors to issue the claim and incur all those costs?”  “Why didn’t I listen to my wife when she said to let it go”.

Depression: Mediators will recognise that stage where things quieten down. The anger seems to have subsided but the client is really low. “I’m sorry Gary. You have tried your best but sadly I don’t think we are going to manage to reach a settlement”. It is at this stage that we need to remain gently tenacious and encouraging and to keep things going. Although it might not look like it at this precise point a settlement is within sight.

Acceptance:  Once the parties have come to terms with the fact that the settlement is not going to be what they initially hoped for they will often say: “I have an idea.  Will you take this offer to the other side for me?”  This is the point in the mediation at which things will often turn in a positive direction. Unlike a bereavement or a redundancy, mediation is actually about gains: settlement of the dispute, hopefully a key need met, time and money saved, reduction in stress, and in some cases the restoration of a functional relationship.

The Kübler-Ross’ model is not necessarily linear.  Not every bereaved person will go through all five stages.  They may go through some of them or in a different order.  In mediation we are talking about two or more parties, each of which may be going through different stages at different paces.  That is what can make it even more complicated and time consuming.

Why is all this important?

I think it explains why some cases do not settle on the day.  Unless both parties get to acceptance they are probably not ready to reach a settlement.  That is not always true of course. I have seen many cases where in anger and /or depression a person has agreed to the settlement in the belief that they really don’t have any choice. Hopefully, they subsequently come to acceptance after the mediation.

Finally, it can help us understand why things can take so long. This understanding can help us to be more patient, whether we are mediator, lawyer or indeed a party to the mediation.  If we patiently stick to the process we will usually get there in the end.

(In relation to vindication in mediation see The Psychology of Conflict, Randolph, p62).

Contact us on 07964 850593 for more information or to discuss your mediation requirements.
Alternatively e-mail us at contact@thepropertymediators.co.uk